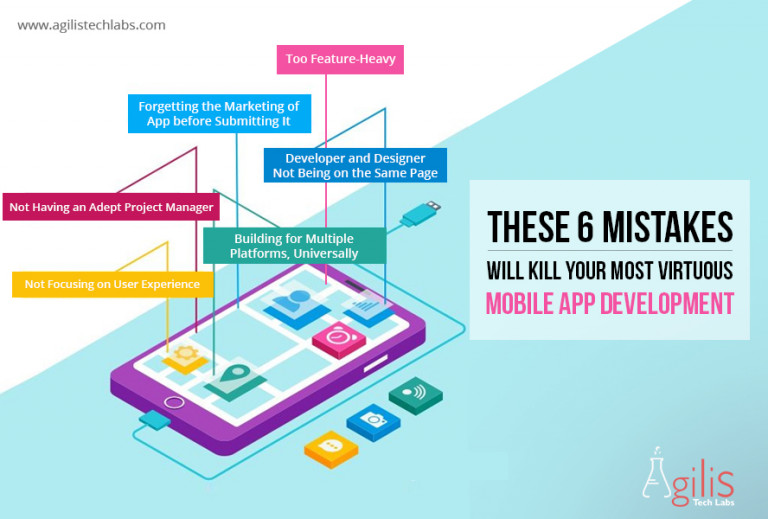 The mobile app market is growing, which means that the various app stores are flooded with a barrage of apps. Amongst these there are many apps that perform admirably, ranking in the upper echelons of mobile apps; on the other hand there are apps that perform poorly and figure among the 26% that are opened just once, never to be used again. So while developing a mobile app isn’t tough, ensuring that it performs well and wins over its customers is another proposition altogether.

As an app developer, one should always be careful of avoiding certain mistakes that could spell doom for the app. Here are the 6 mistakes that are commonly observed with poor apps, and should hence be avoided at all costs.

The most common flaw that is found in many apps is that the designer aims to fit in one-too-many mediocre functions rather than focusing on a few, which perform really well. It is true that you would want your customer to have a complete experience of your site on the app, but filling it up with too many features only makes the app more confusing for the customers. Instead, it is advisable to create a roadmap for your app and keep it simplistic and elegant. That makes for a solid foundation to create an app that performs excellently.

It is true that there are over a million apps that are available for download on both the Google Play and Apple’s App Store, but it is a dangerous road to take if you are thinking about launching your app on various platforms at once. It is important to know that different platforms have different idiosyncrasies and conventions, so creating for different platforms at once will again only create confusion for the users. Additionally, creating apps for multiple platforms will also multiply your designing expenses and engineering costs. Plus, focusing on one platform first will also help you get your minimum viable product in the app store as soon as possible. So getting the MVP into one app store first and focusing on its remedies will help you lower your cost, and develop further iterations better.

3. Developer and Designer Not Being on the Same Page

It is absolutely crucial that the entire team that is involved with planning, designing and developing the app acts as one unit. If the developer and designer aren’t on the same page, the entire process is bound to face more hiccups and issues than usual at every step of the way. So, it is important the creators get the perspective of engineers because creating and coding an app requires a lot of effort and money. So, if everyone is on the same page, there are better chances of the app being free of issues and performing at top levels.

4. Not Focusing on User Experience

User experience is a phenomenon that is especially stressed upon whenever one is designing and developing a technological tool. But it is still very easy to spot apps that do not put enough emphasis on user experience. It is important to note that the mobile experience must be self-describing and intuitive. Coming back to the stat of 26% of the apps being opened only once, 48% of the apps aren’t even opened 10 times. This is primarily down to a poor user experience, with mobile users moving on to a competitor app that is much easier to use. So, it is important to create an app that isn’t difficult to use and gives the user that “wow” factor when they experience it.

5. Forgetting the Marketing of App before Submitting It

An effective marketing strategy has the power to make your app stand out from your competitors like no other. So, it is important to plan your marketing strategy and start promoting your app as soon as possible. As iterated earlier, there are more than a million apps on the App Store and the Play Store, and even if you skim the competition level in your category it will still make for a big reading. So a top marketing strategy can widen your reach and help bring in users that wouldn’t have been possible without a proper system.

6. Not Having an Adept Project Manager